A few years ago, when Isaac was about 1 1/2, we had our first homemade Christmas.  We had a series of financial bumps in the road so I chose to make presents for all of the adults in the family instead of buying them.  It was actually very nice to think about gifts weeks ahead of Christmas because I had to have time to make them.  Even though we got back on our feet financially, I found that I greatly enjoyed making presents for an array of reasons.

First of all, it allowed me to give gifts that didn’t make me go to the mall or some other awful place during Christmas.  I’m really not much of a shopper and I grow increasingly jaded every Christmas each time I hear the saying “Only X shopping days left until Christmas”.  Why does it have to focus so much on shopping?  Gifts don’t always have to be bought and I’m happy to reject as much of the commercial aspects of the holiday as I can. 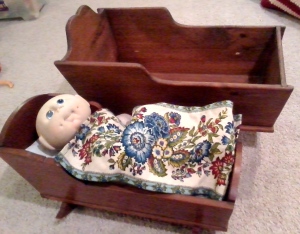 Second, it reminds me of grandparents.  My Grandpa and Grandma Wert would make gifts for us every year.  I have a tree full of Christmas ornaments that they made as well as some of the loveliest, hand-crafted wooden furniture you could ask for. Recently, I was talking to my mom and she mentioned a Christmas long ago when my Dad lost his job just before the holiday.  My mom had a bunch of presents on lay-away for us but had to take them all off because they had bills to pay.  I could tell that she was still kind of crushed just thinking about it.  That year, both of my Grandfathers stepped up and made cradles and height chairs for our baby-dolls. I have memories of only some Christmas mornings and what I received, but that one was one of more memorable.  Much of the stuff was sitting unwrapped under the tree so I could see what it was as soon as I came out.  It was the height of the Cabbage Patch Kids craze and my mom had a friend that made fake CPK dolls so we had new babies to go along with our cradles.  It’s funny that it was one of our poorest Christmas mornings financially but I have the richest memories because of it. 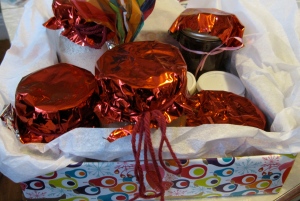 So, over the past 7 years I have gotten creative with my holiday gift planning.  I somehow messed up my scheduling last year though and didn’t have homemade gifts for everyone.  I ended up doing last minute shopping for everyone and even though I think people still liked what they got, I felt hollow doing it.
I was rather disgusted with myself for just mindlessly buying things for people, fingers crossed that they would like them.  Sure, I have the same problem with homemade gifts, especially for guys, but at least my heart is in it. 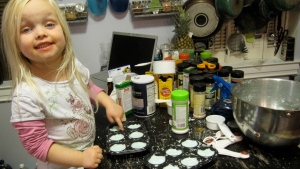 This year I had a few ideas for gifts and started early.  For the ladies, I wanted to make a homemade spa basket.  I took 2 days and cooked up lotions and other goodies in our kitchen.  Mike walked in at some point and said the place looked like a meth lab.  I couldn’t really debate him on that evaluation.  In the basket you could find Vicks Shower Disks,Vicks Vapor Rub, lip balm, Vanilla Brown Sugar Body Scrub, Oatmeal Bath Soak, Lavendar Bath Salts, Bath Fizzies (these didn’t come out great though), &  Coconut Oil Lotion.  Probably half of the items were made partly with Coconut Oil and Bees Wax. I will never be without either of these ingredients again in my life.  I also added jars of the Ginger Pear Chutney and Salted Caramel Pear Butter I canned this summer to the box. 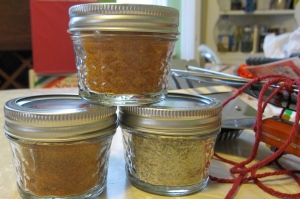 For most of the dudes in the family I made grill sets.  I did purchase some grilling tools like a fork, scraper and kebab sticks to compliment the Brown Sugar, Tandoori, and Greek dry grill rubs that I made.  I also took my macrame skills and made Paracord Survival bracelets so the next time they get stuck on the side of a mountain and need 10 feet of rope to repel down, it’s right around their wrist. 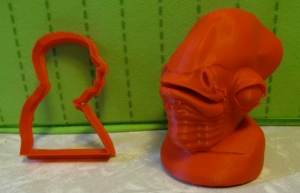 This was also the year for using my 3D printer at work.  For my brother-in-law, Brett, I made an Alfred Hitchcock profile cookie cutter and a bust of Admiral Ackbar (from Star Wars if you aren’t a complete nerd). For my friend Morgan I made a series of Dr. Who cookie cutters as well as cutting pussy-willow branches off the tree and putting them in a cut liquor bottle.  My sister got a custom W cookie cutter I designed to look like the Williamsport Millionaires W (my nephew Jalen plays A LOT of sports). 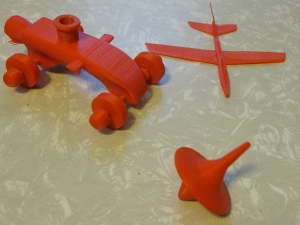 Even though I buy presents for the kiddos in the family, I also wanted to make some fun things for them too.  Isaac & Rosie got a few small 3D printed toys like a top (like from Inception), a glider plane and a little car propelled by a balloon you attach to the top. Our nephews got devil sticks (juggling sticks) and some juggling balls. 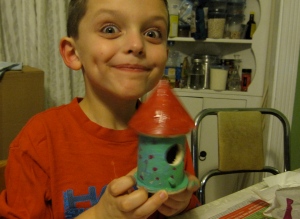 Finally, I have enlisted the children to also start making gifts for everyone.  They made pearl bead ornaments and painted little bird houses for everyone.  I’m already thinking about what we can make next year:) 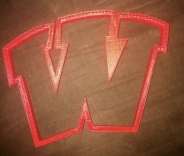 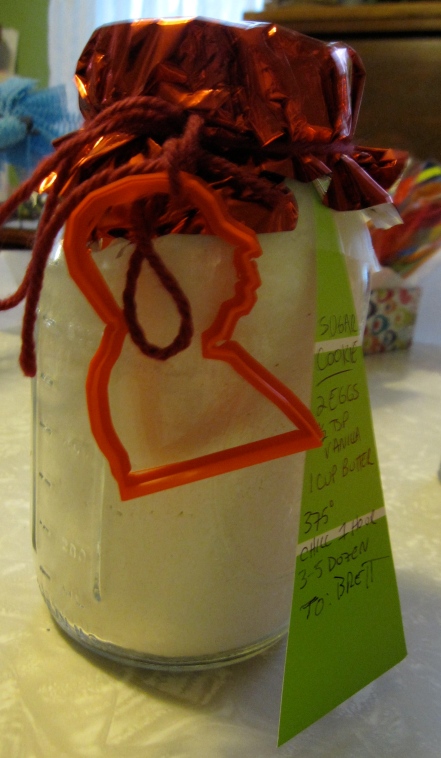 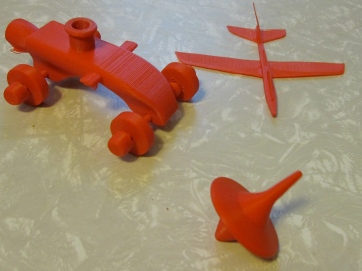 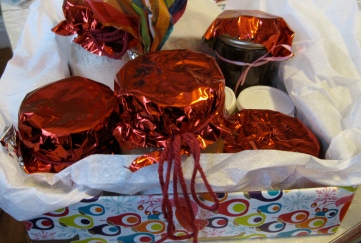 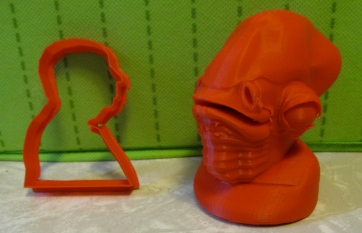 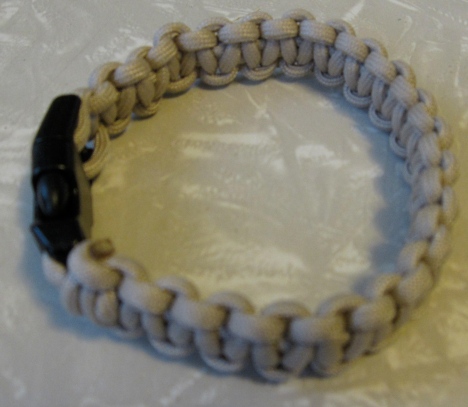 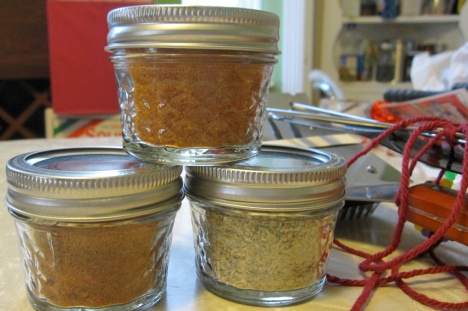 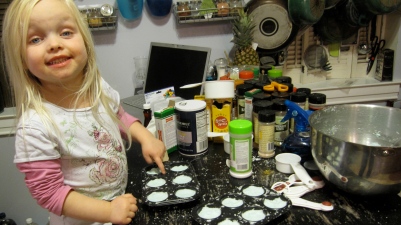 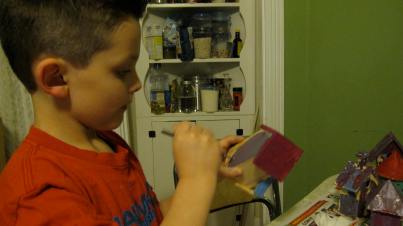 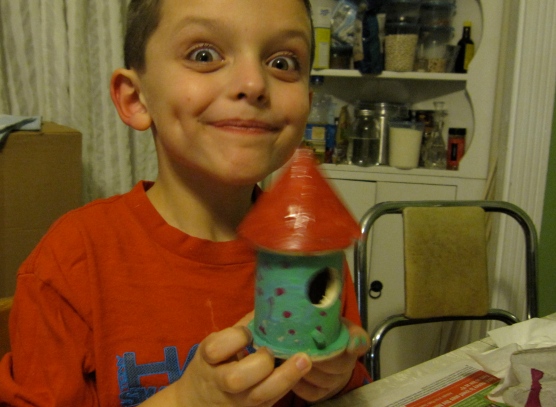 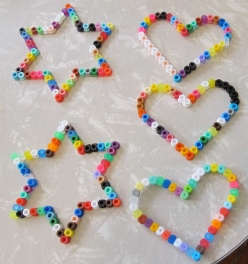 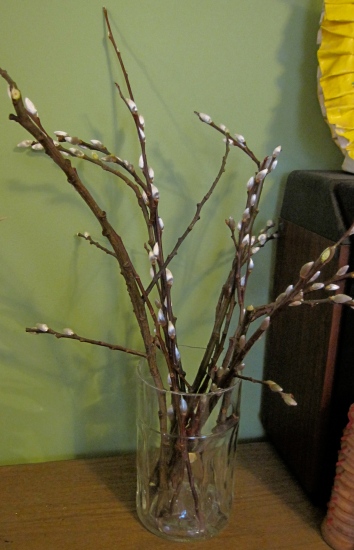 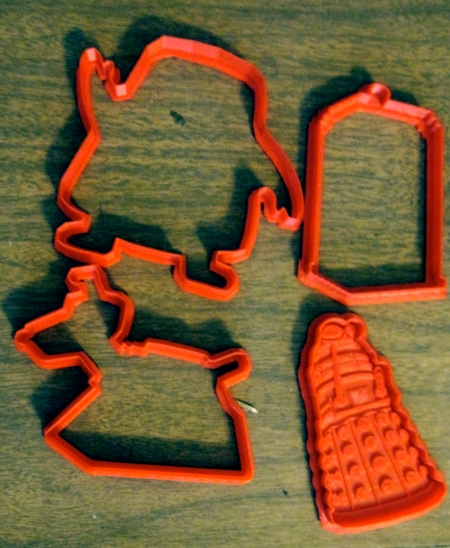 7 thoughts on “A Happy Homemade Holiday”